Coffee: Delicious invention or evil concoction?
The good, the bad and the in-between

Want to hear something unusual? In 1991, coffee was placed on the World Health Organization’s potential carcinogens list, but in less than 30 years, 2016 to be exact, not only was it exonerated, it was also added to the list of “healthy beverages”, when consumed in moderation. Additionally, new research even shows that once smoking history is correctly accounted for, coffee reduces the risk of certain cancers. Talk about a 180 degrees turn!

Before diving into the benefits (or harms) of coffee, let’s first talk about what it contains and what moderate consumption means. Coffee is rich in:

One 8-ounce cup of brewed coffee contains about 95 mg of caffeine. A moderate amount of coffee is generally defined as 3-5 cups a day.

Its all in the genes

Not everyone responds to coffee or caffeine in the same way, and these differences can be substantial. It all comes down to the CYP1A2 gene, which determines how quickly caffeine is metabolised. Roughly half the population carries the “slow” allele which makes them very susceptible to the stimulating effects of caffeine. These are the people that have trouble sleeping after consuming coffee late in the day. Unfortunately these are also the people who have elevated risk of heart attack as a result of coffee consumption¹. So if you are susceptible to caffeine, as evidenced by the hyper-stimulating effects is has, it’s probably best to back off.

It should come as no surprise that low to moderate doses of caffeine may cause increased alertness, energy, and ability to concentrate. In contrast, higher doses may have adverse effects such as anxiety, restlessness, insomnia, and increased heart rate, particularly in the slow metabolisers. But the cumulative research on coffee points to an overall health benefit.

Let’s delve into that unusual fact that we started with. Coffee may affect how cancer develops, ranging from the initiation of a cancer cell to its death. For example, coffee may stimulate the production of bile acids and speed up digestion, reducing the exposure of colon tissue to carcinogens. Additionally, caffeine itself may interfere with the growth and spread of cancer cells², and polyphenols in coffee have also been shown to inhibit cancer cell growth.

Furthermore, coffee has also been associated with lower oestrogen levels (a hormone linked to several types of cancer) and reduced inflammation (a risk factor for many cancers)³. 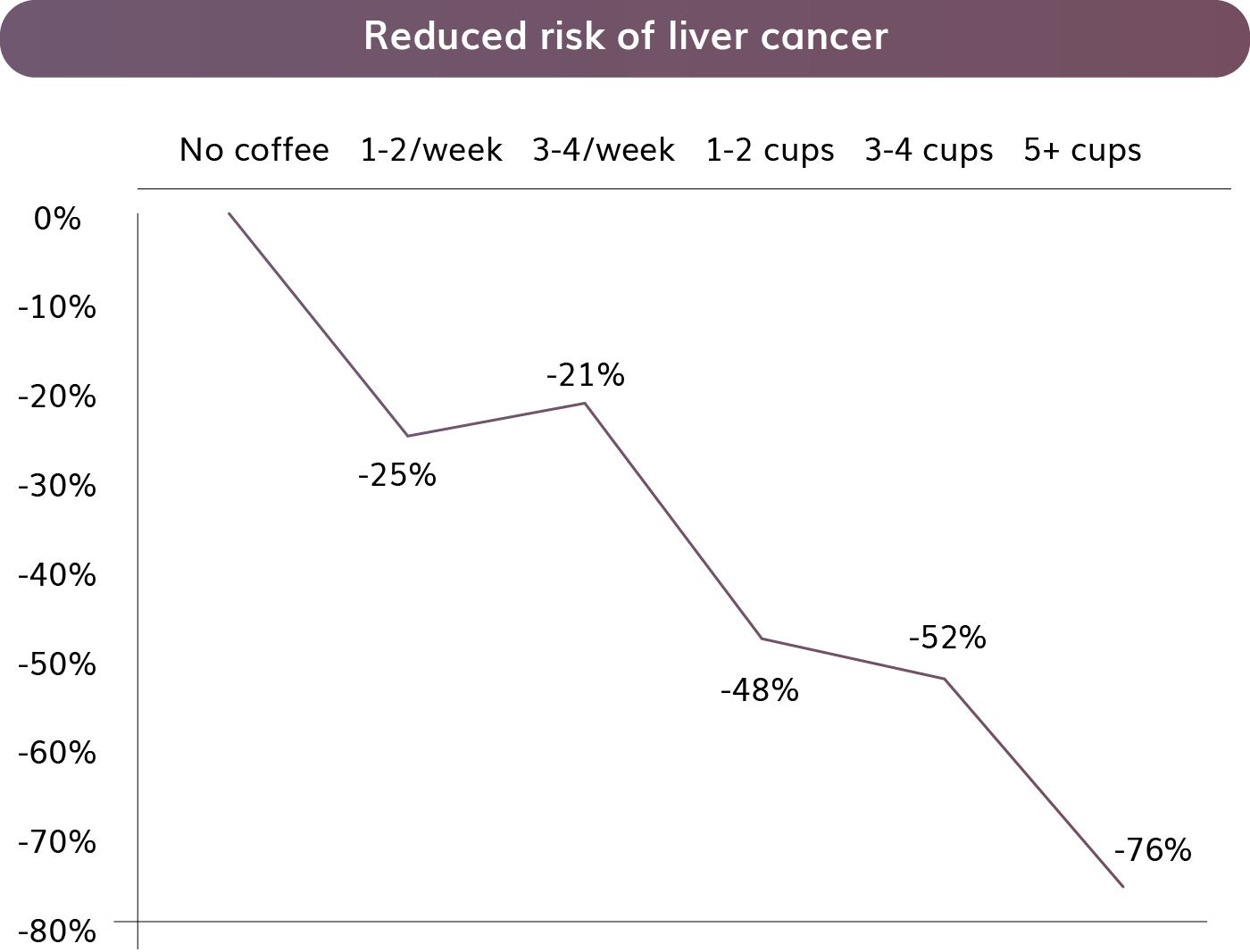 Although in the short-term, ingestion of caffeine can increase blood sugar, long-term habitual coffee drinkers have a lower risk of developing type 2 diabetes compared with non-drinkers. The decreased risk ranged from 8% with 1 cup a day to 33% for 6 cups a day with caffeinated coffee showing a slightly better result than decaffeinated coffee⁴. The polyphenols (particularly chlorogenic acid which is also a strong antioxidant) and minerals such as magnesium in coffee improve the effectiveness of insulin and glucose metabolism in the body. 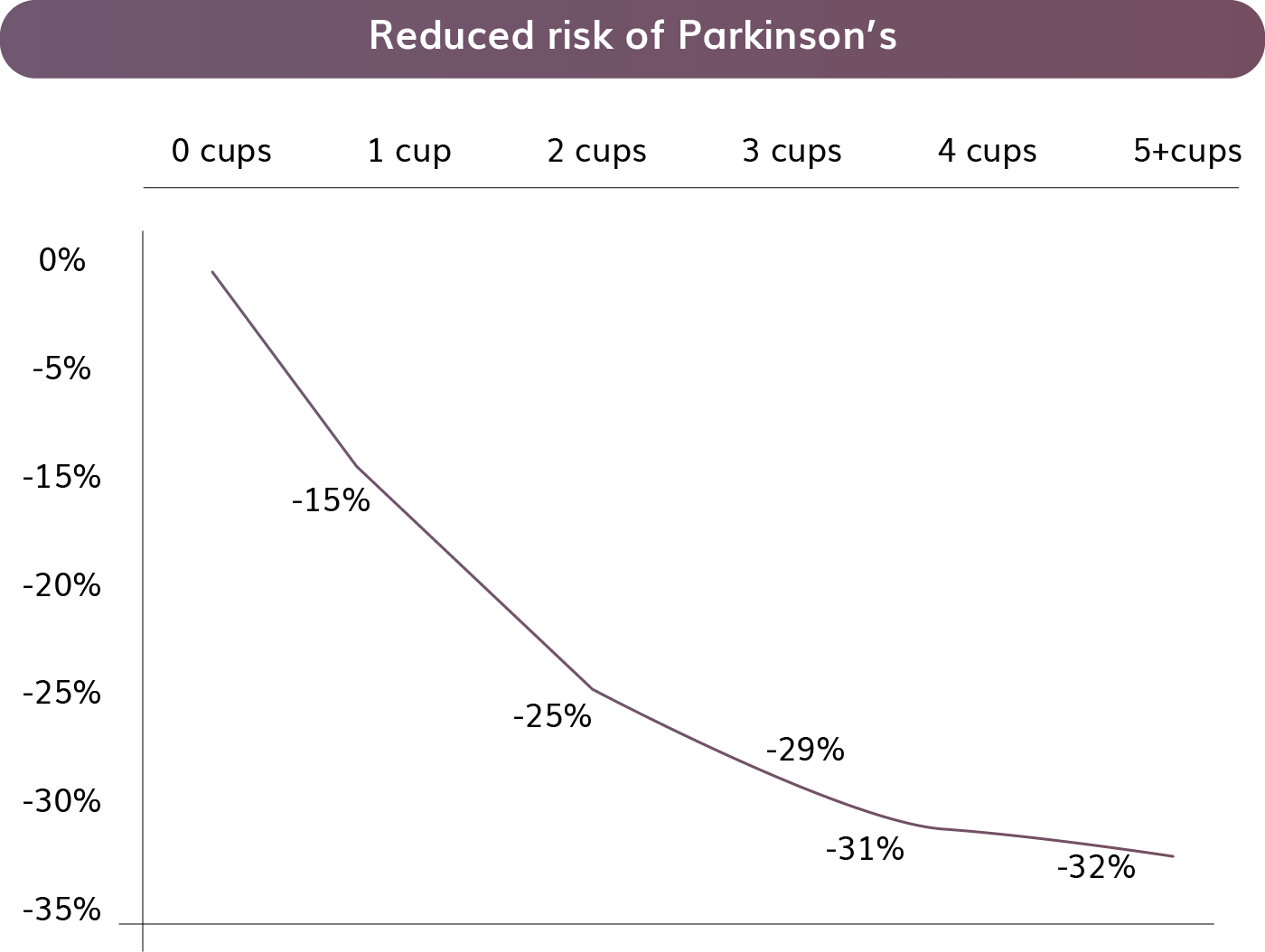 It's not all gravy

Unfortunately, this is also where coffee intake can be a double-edged sword. In sensitive individuals, caffeine can irritate the stomach, increase anxiety or a jittery feeling, restlessness, and insomnia. High amounts of caffeine can even cause unwanted heart palpitations in some. Additionally, unfiltered coffee, such as French press and Turkish coffees, contains diterpenes, substances that can raise bad LDL cholesterol and triglycerides. And quitting isn’t as easy as it seems, the body can develop a dependency on caffeine and suddenly stopping caffeine intake can cause headache, fatigue, anxiety, and low mood for a few days and may persist for up to a week.

So, what’s the bottom line? Consuming moderate (3-5 cups) amounts of coffee daily may lower the risk of several disease conditions. Still, it is not necessary to start drinking coffee if you do not already, or to increase the amount you currently drink because of the potential negative side effects some people experience when drinking coffee. One option to consider if you are sensitive to caffeine is decaffeinated coffee because it offers similar health benefits as caffeinated coffee. It’s also important to keep in mind how you enjoy your brew, i.e. the extra sugar, whipped cream and flavoured syrup might outweigh any health benefits found in a tasty cup of simple black coffee!