Since 1964 when Vroom¹ first linked job satisfaction to organisational performance through its impact on factors such as productivity, efficiency, employee relations, absenteeism and turnover, the business world has been focussed on the 'drivers' of satisfaction. The fact that companies with high job satisfaction outperform the long-term stock market average by such a large margin (89% to 184%) suggests business leaders should acquaint themselves with the concept.

There are many factors that contribute to job satisfaction. Possibly the most important of these is the 'fit' between the skills and abilities of the employee and the demands of the role.

In the early years, when the field of organisational psychology was in its infancy, the predominant models were the “Effort-Reward” and “Demand-Control” models. The Effort-Reward (E-R) model was most famously studied in the British Civil Service³, the so called “Whitehall Study”⁴. 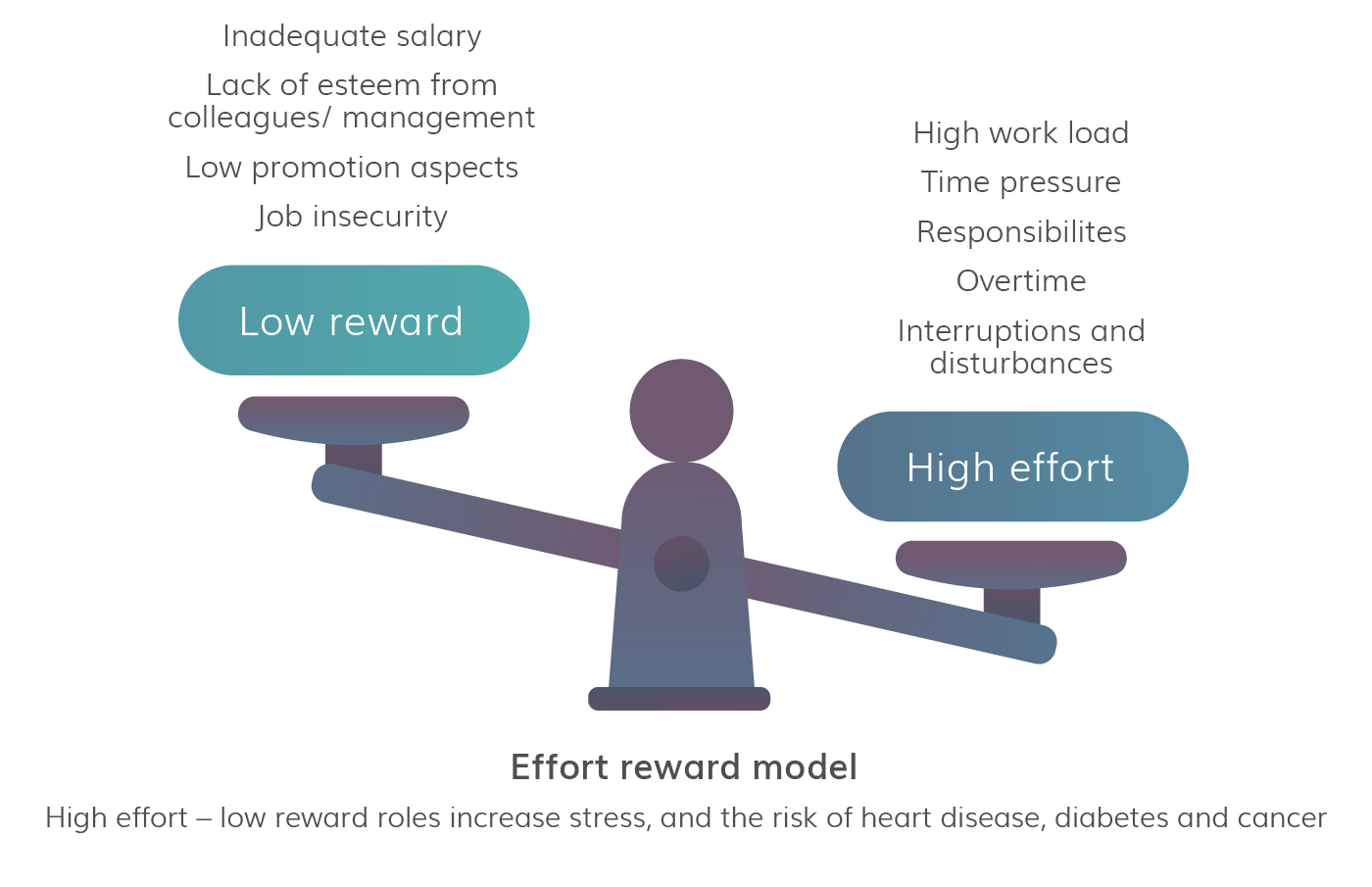 This study showed that those in high effort – low reward roles had greater risk of developing CHD, diabetes and cancer than other workers. Subsequent research pinpointed the stress hormone cortisol as the culprit. Cortisol is released in response to stress and is immunosuppressive. This is why stress increases predisposition to everything from herpes to heart disease. Interestingly, British Civil Servants in the study had similar cortisol levels on waking, but it was the high effort-low reward employees that showed significant elevations 30 minutes later, and even then, it was most pronounced Monday to Friday, indicating it was the prospect of going to work that triggered the cortisol/immunosuppression pathway.

A similar model, the Demand-Control (D-C) model has demonstrated similar outcomes. It’s pretty simple to see the relationship between demand-control and effort-reward; demand and effort are synonymous concepts, so it’s mainly the difference between control and reward that differentiates the models. One can readily imagine that employees are willing to put up with higher demand roles if they have some control over issues such as job design, flexibility of work practices and KPI’s. The most stressful situation, and one that leads to lower levels of job satisfaction, is a high demand role with no control over such issues – you can feel the cortisol going up already!

Likewise, employees are willing to trade off effort and reward. Many employees will readily work longer hours and put in additional effort if the compensation (reward) is deemed adequate (think of “overtime”). The real issue therefore is Effort-Reward Imbalance, or ERI as the model is often referred to.

Does the job fit?

Job fit, as mentioned earlier, is a key concept in relation to job satisfaction. Whereas E-R and D-C models apply regardless of how well suited an employee is to their role, job fit is quite specific to the individual and their role. Hiring employees who are the 'best fit', or 'most suited' to their positions is pivotal in maximising employee retention rates.

There are a myriad of factors that can influence job fit. Personality, for instance, can have a major effect on how happy or content an individual will be in a particular position. Candidates who are not assertive may be unhappy in a managerial position, while extroverted individuals may be dissatisfied working in a role that involves minimal human interaction.

More detailed determination of both the job/task requirements and the knowledge, skills abilities and other characteristics (known as KSAO’s) of the job, and a potential employee, allow the selection process to be refined significantly, resulting in a better person for the job, higher job satisfaction, less impact on psycho-emotional wellbeing, reduced absence, greater productivity and a higher likelihood of retention.

Getting ahead of the game

With global employee turnover running at around 15%, and the Bureau of Labour Statistics in the US showing that 20-24% of Americans change jobs each year⁵, it’s no wonder that the global spend on recruitment is around $200 billion annually⁶ (0.25% of Global GDP).