It’s all in the mind…

Well, not exactly all of it. A significant component of an individual’s response to stressors in their environment appears to be of genetic origin. But before you go and chastise your parents for failing to pass on the right genetic material, let’s look at what’s going on here.

We know through personal experience that the same event may elicit grossly different responses from different people. Some people can remain calm under pressure, some go to pieces. Even from a cultural perspective, some cultures tend to have population wide similarities in their response to people and events.

Traditionally most of this was assumed by psychologists to result from personality and coping behaviours learnt or observed during the formative years of brain development.

This explanation is in line with the collectivism-individualism dichotomy; American values promote individual autonomy and personal achievement, where Asian values promote relational harmony. Emotion expression is consequently seen to be influenced largely by the culture in which a person has been socialised.

Genetics vs the environment

The social determinants of our psychological makeup are obviously important, but so is the genetic influence.

Most of us have heard of serotonin, the feel good neurotransmitter that gives us that nice warm feeling when good stuff is happening to us. In fact the world’s most commonly prescribed medications for stress, depression and anxiety are for drugs that effect the serotonin pathway (i.e. Prozac, Zoloft and Celexa). These drugs, collectively known as SSRIs (Selective Serotonin Reuptake Inhibitors) work by blocking the reuptake of serotonin after its release, resulting in a stronger, longer lasting "feel good" period.

Serotonin is transported by a particular protein which comes in two forms, one more active than the other. Our genes code for either one of these transporters.

If you happen to express the gene for the less active version, you will not transport as much serotonin into the reward section of your brain, and the highs you feel as a result of various experiences will be dampened. So, there is, undoubtedly, a relationship between our genetic makeup and our predisposition to stress, anxiety and depression.

But DNA is not destiny in this case. It seems that the environment provides the trigger, and so in the absence of Stressful Life Events (SLEs), the genetic influence is unlikely to be problematic.

As the saying goes, “genes may load the gun, but the environment pulls the trigger”. Such is the case in may other areas of health. An individual may have a genetic makeup that predisposes then to type 2 diabetes, but in the absence of weight gain and poor dietary influences, the trigger may not get pulled.

The table below shows numerous studies which show evidence of genetic/environment interaction (GxE) in relation to mental health.

What this table shows is that a trigger such as childhood maltreatment or chronic unemployment (Column 4) is more likely to result in Major Depression in those with the less active version of the serotonin transporter. 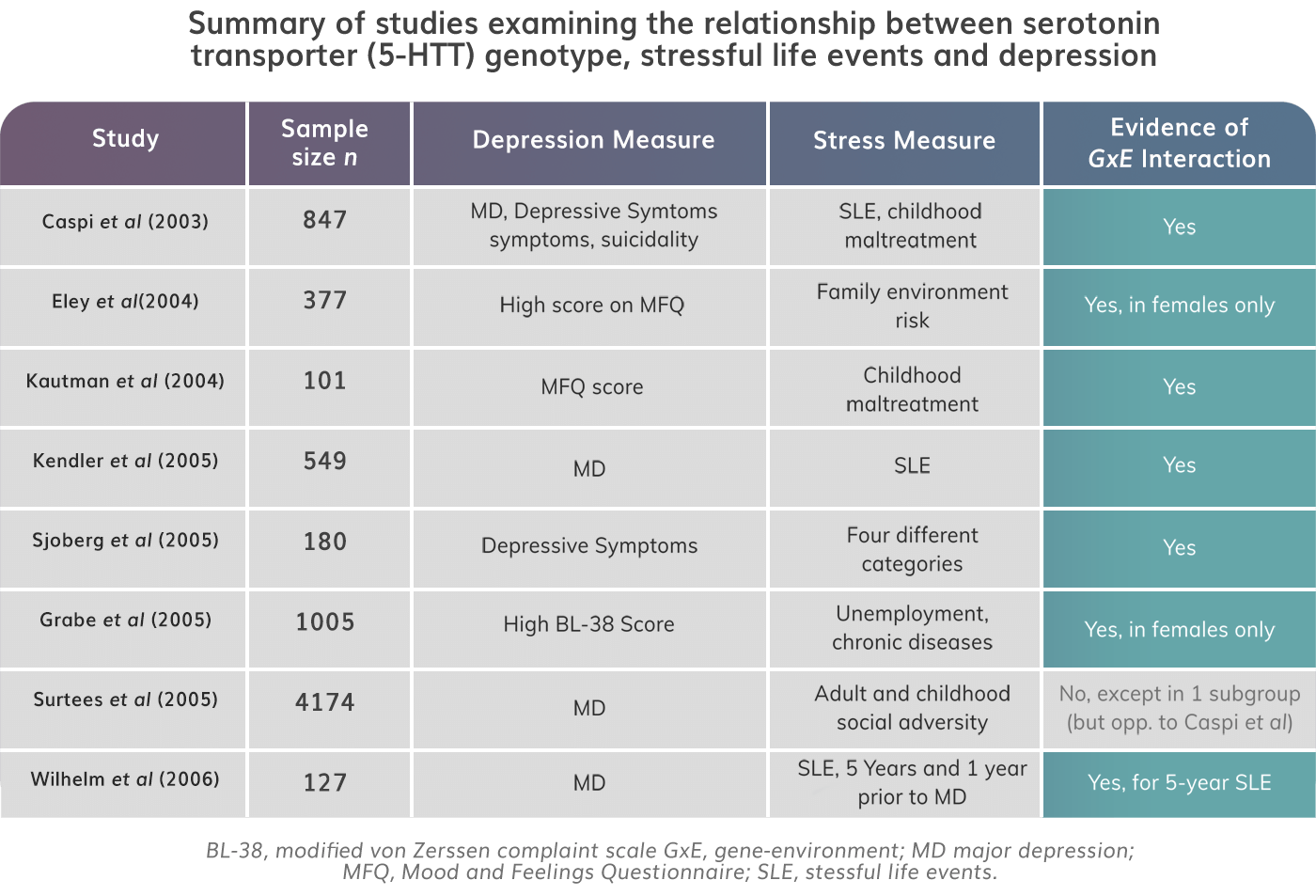 Notwithstanding this predisposition, the development of good mental health strategies in relation to coping skills, relaxation, adequate sleep, exercise and good self-care all mitigate the risk that the genetic trigger will be pulled.

The SHAPE Survey not only looks at symptoms of stress, anxiety and depression in employees, it also provides analysis of the work and non-work sources of stress, coping strategies and their effectiveness, and levels of employee resilience. This information is critical in informing the design of an effective intervention strategy to mitigate the risk associated with the psychological health of employees.