Who could have imagined that a 100 year old experiment conducted on rats could teach us something valuable about employee engagement at the workplace.

About a century ago, two psychologists, Robert Yerkes and John Dodson, conducted an experiment where they motivated rats to move through a maze using varying levels of electric shocks. They discovered that up to a certain level the performance of the rats improved, but high levels of shock resulted in erratic behavior where the animals scurried around and failed to complete the maze.¹ They lost direction and moved to “survival” mode.

Does this seem relatable? As humans, we have the tendency to perform better under some level of stress, but if stress levels are alarmingly high, we fail to perform at all.

The Yerkes-Dodson law can be explained through the graph shown below. At very low levels of arousal/stress there is ‘boredom’ and low performance, if arousal is increased it shows improvement in performance up to a certain point. Crossing the ideal point the situation shifts from eustress (good stress) to distress (bad stress) causing a sharp decline in productivity.² 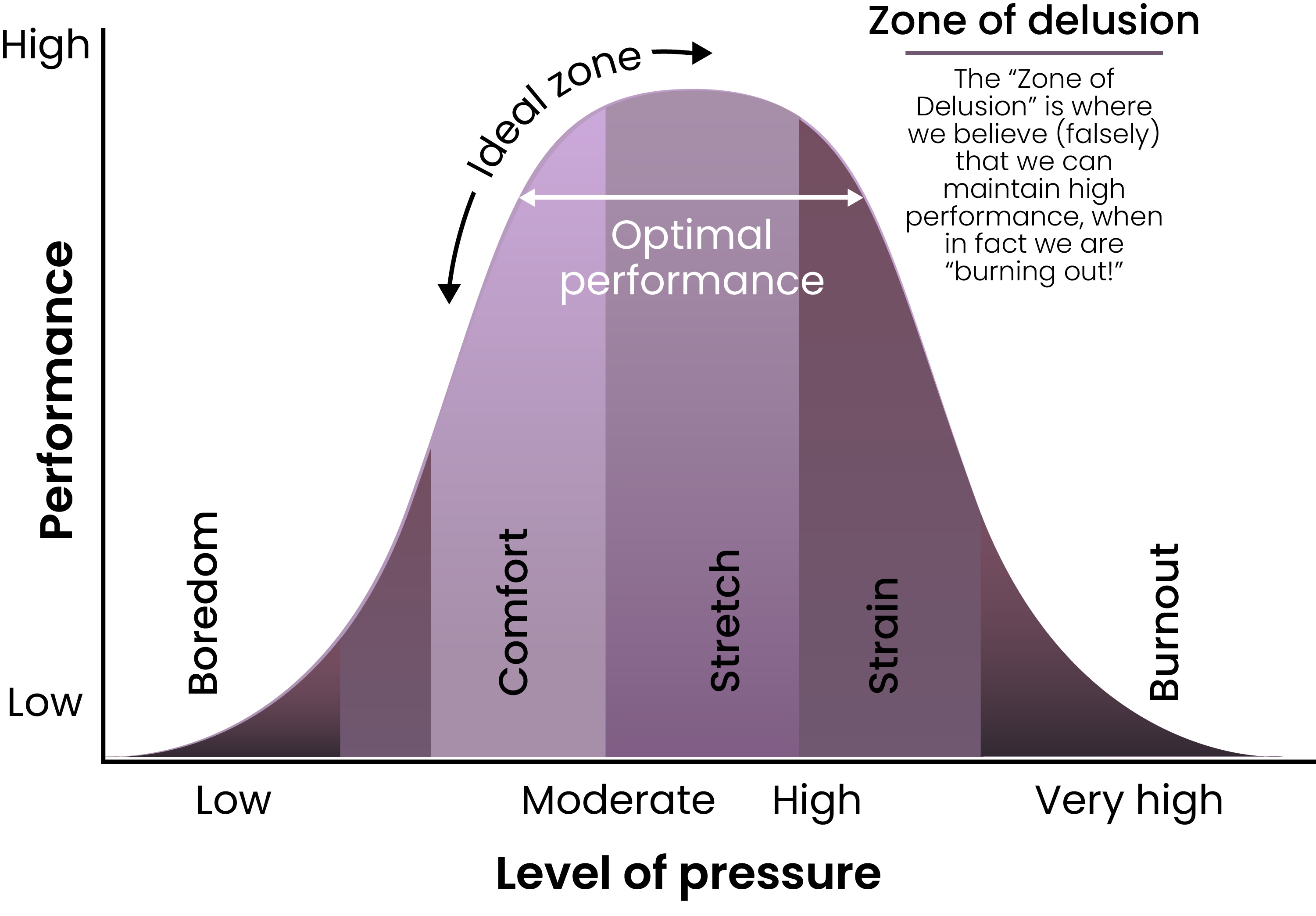 Now let’s go back to employee engagement. Employee engagement is defined as the mental and emotional connection an employee feels towards their team and colleagues. It is the degree to which employees and dip into their “reserves” for the sake of the company.

Most companies are tempted to aim for 100% employee engagement. What they fail to realise is that 100% employee engagement equals extremely high levels of stress for the employees, and as observed on the Yerkes-Dodson curve, this indicates that they lie on the declining end of the curve leading to anxiety and impaired performance.

Moreover, no employee would want to give their 100% to the company. If they do so, what percentage of their time and energy would they be giving to their family, friends, or even themselves? That would be 0%. Their work-life balance would be tragic.

Interestingly, much later, around 2007, biologists discovered a similar relationship to the Yerkes-Dodson curve relating glucocorticoids such as cortisol (a stress hormone) with memory performance. They showed that with very low or high levels of cortisol, memory formation can be impaired, whilst at moderate levels of cortisol, memory performance significantly improved.³

We can therefore assume that cortisol levels, linked to stress, can impact performance and cognition. It is the cortisol that causes the rise and fall in the performance curve. High or low levels of cortisol have also been known to suppress immune function resulting in increased susceptibility to disease, and an impairment of cognitive abilities.⁴ This makes it difficult to concentrate and perform creative and/or challenging tasks that might be required at work.

Having a certain amount of stress at work through deadlines and performance expectation can improve performance and cognition, but if stress levels escalate, we move from eustress to distress, cortisol levels soar, and performance will be compromised.

It is extremely important that managers and employees alike identify the level of (eu)stress that can maximise performance, whilst limiting high level stressors that can cause low productivity. When this is achieved, employee engagement will be optimised. Various stressors at the workplace impact performance and engagement such as negative culture, poor relationships with managers and peers, excessive workload, or lack of appreciation.

SHAPE helps both employees and employers identify these stressors by looking at over 20 sources of work and non-work related stress. This will ensure interventions target the most appropriate concerns of employees, which in turn will improve their desire and ability to attend and perform at work.

²Gino, Francesca. “Are You Too Stressed to Be Productive? Or Not Stressed Enough?” Harvard Business Review, 5 Oct. 2017, hbr.org/2016/04/are-you-too-stressed-to-be-productive-or-not-stressed-enough.