Corporate Culture primarily revolves around the underlying beliefs, values and personal/professional interactions that build the social environment of an organisation.

It is often stated that corporate culture is simply “the way things are done around here” or “how we act when no-one is looking.” Corporate culture therefore reflects expectations of appropriate behavior for various situations which is not necessarily codified in corporate policy documents.

Corporate Culture has a profound influence on how much employees identify with their organisation¹.

Corporate Culture can be thought of as the personality of the organisation, and just as there are good and bad aspects of personality in people, there are good and bad aspects of corporate culture within companies. We value integrity, resourcefulness and dedication over aggression, laziness and arrogance in people, just as we value trust and respect over cronyism and authoritarianism in our work environment.

A strong corporate culture ensures various benefits. According to James L. Heskett, the culture of a company explains 20-30% of the differential in the company’s performance, in contrast to companies which are labeled as “culturally unremarkable”².

According to the Harvard Business Review, corporate culture is unique and created by various factors, but six common components enhance the organisational culture³. Understanding and recognising these particular factors are essential for understanding corporate culture:

A successful company culture is initiated with a vision or mission statement. This in turn guides the company’s values. These values influence every decision employees make. When they are prominently displayed, vision statements can even help guide customers, suppliers, and other stakeholders. A vision statement is a simple but foundational element of culture.

A company’s values are the basis of its culture. While a vision articulates a company’s purpose, values offer a set of guidelines on the behaviours and mindsets needed to achieve that vision. While many companies find their values revolve around a few simple topics (employees, clients, professionalism, etc.), the originality of those values is less important than their authenticity.

Many values that make the final list following an organisational “Vision and Values” exercise are the tried and true, irrefutably important ones that few people could argue with. Take American Express for example. Their “Blue Box” values read like a list from an MBA 101 course – quality, integrity, commitment, respect and accountability – far from innovative and probably common to the majority businesses that bother to publish their values. But it does serve as something all employees can point to and say “you are/aren’t playing by the rules”. 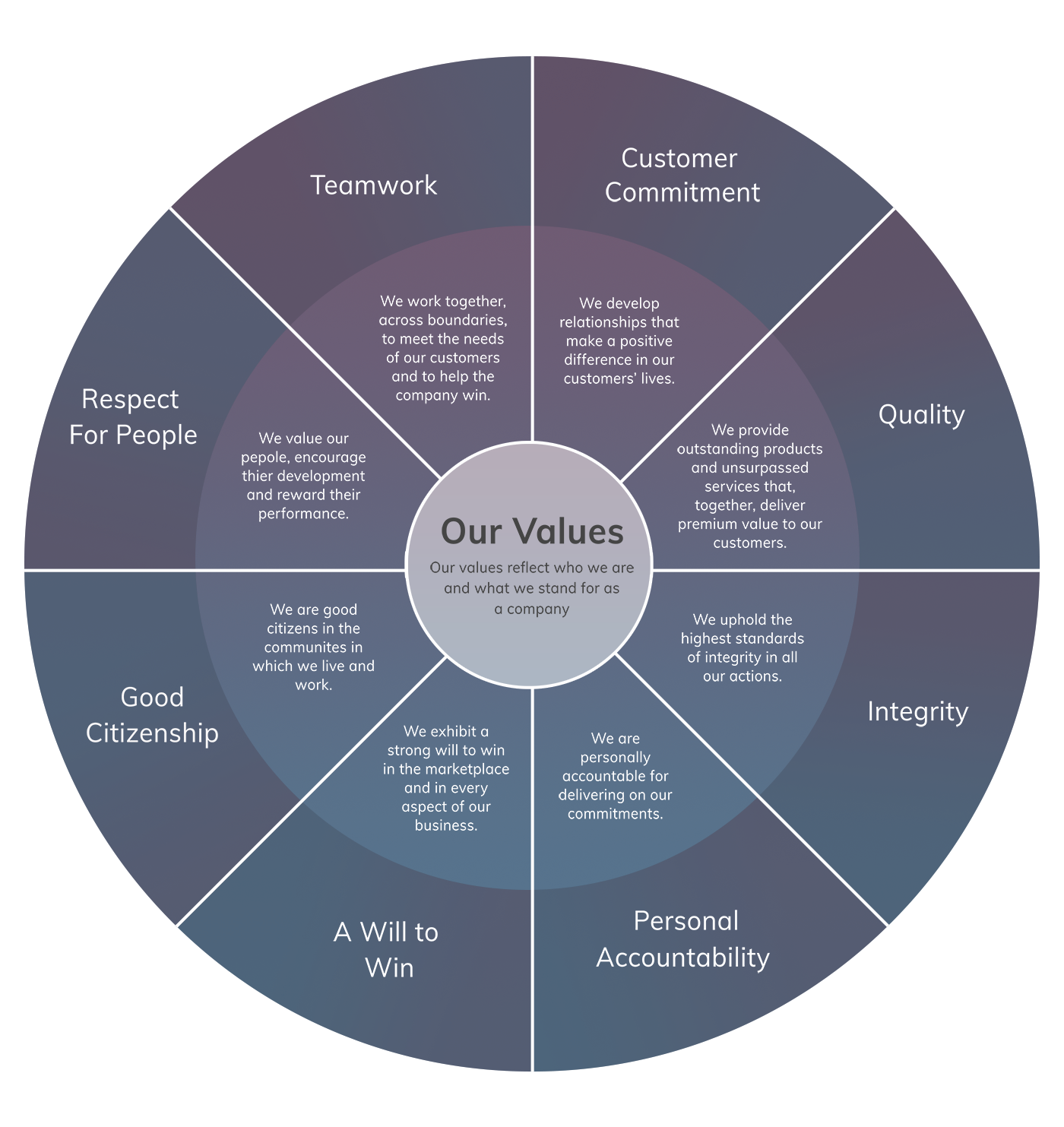 Values, unless acted upon, are of little importance. If an organisation professes “people are our greatest asset,” it should also be ready to invest in people in visible ways. Similarly, if an organisation values “flat” hierarchy, it must encourage more junior team members to dissent in discussions without fear of negative repercussions. Whatever an organisation’s values, they must be reinforced in review criteria and promotion policies and baked into the operating principles of daily life in the firm.

Many companies fail to transition vision and values into actual practices which creates an additional burden on gaining employee commitment and engagement. If we say "X” but in reality do "Y”, the vision and values become a prominent reminder to employees of the failure of the business to follow through with their commitment to corporate values.

It is up to all employees to defend company values by calling out those who do not uphold them. Just as a goal without a deadline is a dream, a value statement without employee support is simply a list.

A company cannot build a coherent culture without people who either share its core values or possess the potential to adapt to those values. Charles Ellis shows, as noted in a recent review of his book What it Takes: Seven Secrets of Success from the World’s Greatest Professional Firms, the best firms are “fanatical about recruiting new employees who are not just the most talented but also the best suited to a particular corporate culture.”

Ellis highlights that those firms often have 8-20 people interview each candidate. As an added benefit, Steven Hunt notes at Monster.com, one study found applicants who were a cultural fit would accept a 7% lower salary, and departments with cultural alignment had 30% less turnover. People stick with cultures they like and bringing on the right 'culture carriers' reinforces the culture an organisation already has.

Employees essentially “own" the culture of the company, and they can defend or abandon its principles. Defending company values preserves the company culture, and this means calling out those whose actions contradict them. Silence in the face of non-compliance will erode commitment to, and confidence in, the company culture.

Whereas a vision is forward looking, the narrative is a retrospective. Marshall Ganz, the architect of Barack Obama’s 2008 presidential campaign and now a professor at Harvard, is an authority in the power of narrative. Any organization has a unique history — a unique story. And the ability to unearth that history and craft it into a narrative is a core element of culture creation. The elements of that narrative can be formal, but are more powerful when identified, shaped, and retold as a part of a firm’s ongoing culture.

The narrative tells employees how we got here, the obstacles we faced and overcame, how we pursued the vision with great energy and commitment. People have a family history, companies have their narrative.

There are numerous reasons why certain companies prefer certain spaces to function in, but one clear reason is that place shapes culture. Open architecture is more conducive to certain office behaviors, like collaboration. Certain cities and countries have local cultures that may reinforce or contradict the culture a firm is trying to create. Place — whether geography, architecture, or aesthetic design — impacts the values and behaviors of people in a workplace.

There are various other factors that influence culture, but these six components provide a stable base for enhancing the corporate culture.

Company culture is more important than ever. It’s not that company culture was ever unimportant, but it’s quickly proving to be a “must-have” rather than a “nice-to-have.” In today’s workplace landscape, HR leaders consider culture and engagement their number-one challenge. It’s clear that in order to attract, retain and engage the modern workforce, organisations need to focus on company culture.

Statistics show that a company’s culture has a direct impact on employee turnover, which affects productivity, and therefore success. A Columbia University study shows that the likelihood of job turnover at an organisation with a rich company culture is a mere 13.9%, whereas the probability of job turnover in poor company cultures is 48.4%⁴.

With the cost of employee replacement running somewhere between 16% of annual salary for low paying jobs and 200% for executive positions, this difference in turnover is likely to increase company expenses by around 25% of their payroll⁵. Considering that payroll costs, on average, account for 20-30% of all company expenses, this represents a huge expense to any organisation whose culture is responsible for such an exodus.

The Department of Economics at the University of Warwick found that workers happy with their corporate culture/ work environment are 12% more productive than the average worker, and unhappy workers are 10% less productive⁶.

According to a Harvard Business School study, it was found that corporate culture changes have a significant impact on the financial performance of the company⁷. Following is the table which represents the changes:

The differences here are truly staggering, 4-fold greater revenue and 12-fold higher market capitalisation are testimony as to the value of culture.

According to Forbes Magazine, “Company perks and office amenities will only go so far in persuading candidates and employees to join or stay with your organisation. We found the top four factors for company culture to attract and retain talent were open communication, strong leadership, work-life balance and company values — and this was consistent across all age groups, sectors and parts of the country.”

In a survey of more that 1,000 workers, 35% said they would decline a job offer if the role was perfect but the company culture wasn’t⁸.

The SHAPE survey covers over 30 aspects of Corporate Culture, including various elements of values, leadership, manager/peer/subordinate relationships, processes, rules and discipline, aesthetics and pride. This comprehensive investigation of culture shines the spotlight on where companies are excelling… or failing.